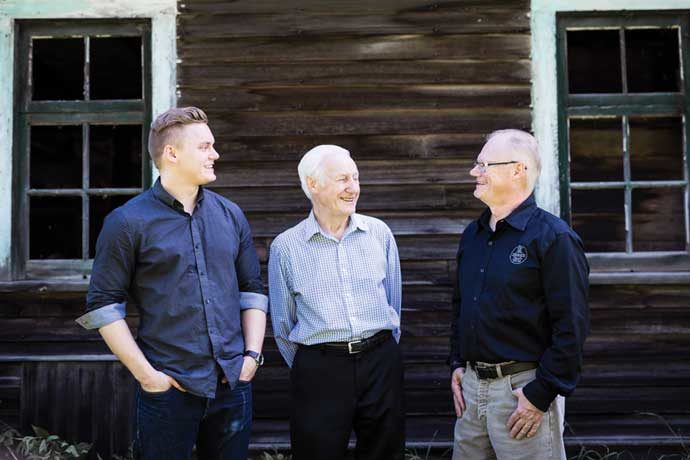 From humble beginnings in a Canadian town of 250 people, Drake Meats is poised to continue its growth across Canada and is on the cusp of launching its meat products in the international marketplace.

With its roots dating back to 1949 as a co-op local frozen food locker and custom processing shop, the facility was bought by Mennonite farmer Norm Ediger in 1958 in the community of Drake, Saskatchewan. The fledgling enterprise experienced a major setback when a gas fire burned the entire plant in 1982. Norm’s son Kelly Ediger, who spent time at the facility since the age of 2 to be with his parents and grandparents, reflected on how the family dealt with that disaster.

“We lost it all but took on a new mandate to rebuild Drake Meats and expand our lineup of craft recipes beyond our small town,” Kelly Ediger said. “I had just bought the business from my father two years earlier. We replaced the old 4,000-square-foot facility with one 2,000 square feet larger. It was a year and a half to construct the new building. We had only eight employees. Through our new product lines, reliance on quality and our good name, we set about taking our meats to other small towns, then into larger cities.

“I guess you could say I was our marketing department taking product samples store to store. Sales was not my gift, so we brought on Greg Jantz to handle the marketing. He’s been with us nearly 30 years, with about 20 of them in the marketing area.”

Ediger, 63, now regarded as both chief executive officer and patriarch of the company, said a decision was made to give up the custom and game processing work to focus on value-added processing for grocery chains. To keep up with increasing demand, Drake Meats leased a processing suite under Canadian federal inspection at the Agri-Food Innovation Centre in Saskatoon, enabling the growing brand to ship its meats throughout Western Canada.

The company’s array of featured products saw manifold growth and through a network of distributors and Drake Meats’ own delivery system, which they later subcontracted out, they eventually had their meats in several major supermarkets and chain stores across Western Canada. When normally strong foodservice sales – that accounted for nearly 20% of the company’s volume – fell off during the COVID pandemic, it became imperative that flexibility in products and markets was taken into account. 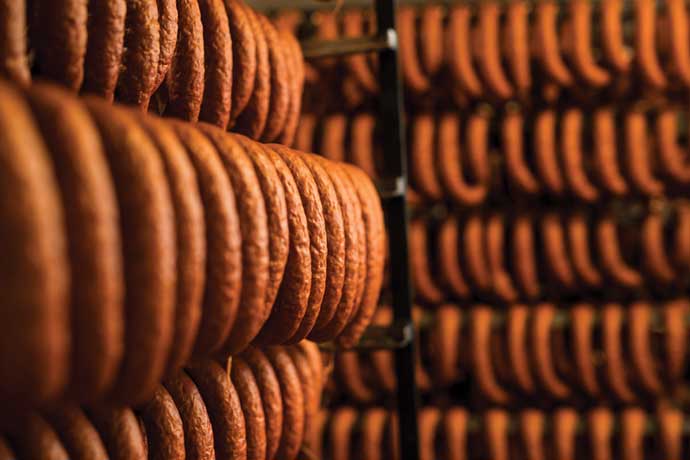 Drake’s Farmer Sausage is one of the company’s flagship items. (Source: Drake Meats)

Growth didn’t come easily, he explained. In challenging times, financing was a major problem for new equipment and modernization. That was “until we found some financial partners who believed in us during those chilling years.”

New product introductions are thought through in the research and development department that Jantz oversees. He explained that perhaps 80 different products being considered for production and marketing resulted in only five actually being introduced.

Drake Meats features beef and pork products that are hardwood smoked. They range from hams, bacons, wieners, deli meats, pizza toppings, smokies, sausages and snack sausage items, burgers and jerky. Their new Jerky In A Box program, a monthly subscription e-commerce store, was launched in an effort to adapt to the COVID pandemic, quickly becoming another successful arm of the company. Most of the products are described on the company website, drakemeats.com.

Among the firm’s unique offerings are a prime rib flavored all-beef wiener and a burger infused with barbecue sauce and marketed as Cattleboyz. They’ve also conjured up a Pork Souvlaki burger spiced with traditional Greek seasonings.

On the 70th anniversary of the company’s founding, they introduced a Norm Ediger Signature Series Mennonite Sausage, which is based on an original family recipe. It is an item the company regards as one of its flagship products.

Drake Meats’ processing plant has mushroomed in size to 30,000 square feet and its provincial abattoir processes about 20 Saskatchewan-raised beef cattle and about 450 pigs a week. The company does co-packing and private labeling for several other companies.

“Company growth has been realized by just building on core company and family values,” Ediger said. “But we are indebted to our many suppliers of equipment and spices who have shared their team expertise with our in-house team. It’s truly a partnership. When we succeed, we all win.”

About 10 years ago, Drake Meats closed its 1,000-square-foot retail store – long before the COVID pandemic – to focus on its expanding markets. Ediger said it was a difficult decision since most residents of the small town of Drake wanted to buy the company’s meats locally. To accommodate local shoppers, the firm offered a pick-up service across the street from the main plant in their administrative building.

For the future, the former locker plant operation is still advancing its original comeback dream of growth. Ediger explained that in the past three years they have been studying the possibility of building a new federally inspected processing plant.

“It is conceivable that in another two years this might become a reality,” he said. “Parallel to the new operation, we would continue to operate our provincially-inspected facility in Drake. This is still in the planning stage, but I think we have the right team and future market vision in place. My son Tyson Ediger, who’s been working at the company since an early age, has obtained a BA in business administration and has been a great addition to our management team.

“There is one thing that we have to regard carefully and that is our workforce. We are now up to 110 employees. They are invaluable individuals who help fulfill our company mission and vision. Much of our current and future workforce is composed of new Canadians, currently spanning 10 different nationalities. They have brought a high degree of loyalty and commitment to team with our local workers to produce our craft meats. We see that as a key part of our future workforce.

“And then there is the element of marketing in new regions, hopefully including the United States. Products that sell in our area may not be as popular in other locations in which we hope to market. It’s also important for us to realize that like everything around us, food trends change. So, when we are planning for the future and new growth, we must consider that some things will not be as we expected them to be and we will have to always keep flexibility in mind and build that into our planning. We want to always go that extra mile for our customers and our partners.”