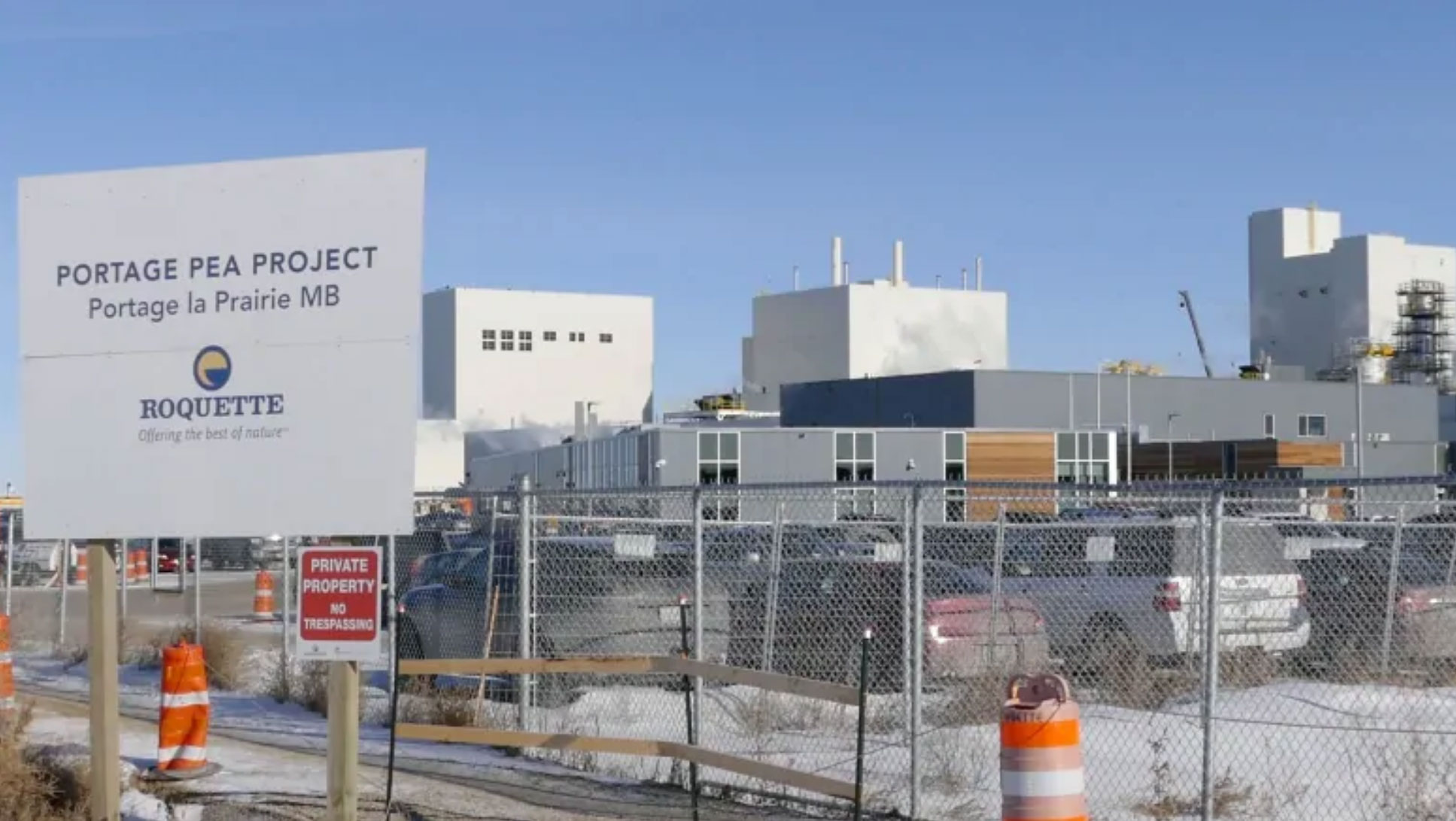 A mammoth new pea-processing plant built just outside Portage la Prairie has taken its first shipments of Manitoba peas and expects to fully ramp up production by the beginning of 2022 — opening a welcome new market for local producers, says one industry association.

Construction on the $600-million facility, which the French company Roquette bills as the largest of its kind in the world, began in 2018.

Once fully operational, it will produce pea protein for food and sports nutrition products, along with food-grade starches and components like pea cream for animal feed.

A spike in demand in recent years for protein-based foods, like meat alternatives, has resulted in a higher demand for peas, said Céline Deneuville, the Portage la Prairie plant’s manager.

“Every day, every week we can see more equipment, and yes, it is very exciting and I am very anxious to see the plant start up,” she said.

Deneuville moved to Portage la Prairie, a small city about 85 kilometres west of Winnipeg, from France to run the plant. She is one of two women at the helm of the plant’s operations — Ginette Breault is the other, serving as the production manager.

The plant is expected to employ around 120 people once it is fully operational.

Construction on the facility has been steady and fast, despite COVID-19.

On a typical day, around 1,000 construction workers and contractors are on the site — which totals more than 27 hectares — taking on mechanical and electrical projects, welding and more.

Roquette doesn’t allow photos or video to be shot inside the facility, due to the proprietary nature of some of the equipment, but the site resembles a small town, with rows of construction trailers and even its own water tower.

About 60 kilometres of piping has been installed to date and teams from around the world have been brought in to help start up and calibrate the plant, which will be heavily automated.

“It’s very important for us,” said Deneuville, who adds the high level of automation is not only safer for those working inside, but also allows for tighter control and oversight of the product as it moves through the plant.

“It is possible to react immediately to avoid a bad quality of the product.”

At the helm of it all is a central control room with a wall of monitors and a large desk with a row of computers. The centre, which looks more like NASA’s Mission Control Centre than might be expected, is operated by six people who watch over every aspect of the 20,000-square-metre site on a round-the-clock basis.

The company also conducts its own lab testing — there’s a microbiology lab on-site — and sensory testing, which is used in the grading process.

Roquette is banking on Manitoba farmers growing more peas. The majority of peas grown in Western Canada are currently destined for China and India for processing, according to Daryl Domitruk, executive director of Manitoba Pulse and Soybean Growers.

“It’s another outlet for growers to consider,” he said, and will give producers, particularly in western Manitoba, an incentive to grow peas. “It’s another market and it’s a local market. So it’s a welcome addition.”

Domitruk said peas currently account for a relatively small portion of crops grown in Manitoba — around 50,000 hectares per year, mostly along along the western edge of Manitoba.

By comparison, 1.3 million hectares of canola were seeded in Manitoba in 2020, according to Statistics Canada.

Saskatchewan produces more than a million hectares of peas.

Domitruk said the popularity of peas has waned over the years in Manitoba, mostly due to the weather — peas grow best in drier conditions. At most, about 105,000 hectares of peas were seeded back in the late 1990s.

But he believes some producers may be willing to give the crop another shot with more of a local market to sell them to.

“Peas have come back to some degree now as a legitimate option.”

Deneuville said the local market in Western Canada was one of the reasons Roquette chose Manitoba — an effort to bring the processor to the peas, rather than shipping the product to a distant processor, she said.

“It is the right place for us,” she said, adding that Manitoba has an abundance of skilled labour and a sustainable hydroelectric power source.

“Our main customer is North America,” she said.

“It’s very strategic because Canada is a [leading] producer of peas and that’s why it’s very nice to be here. It’s very important to work directly with farmers.”

The plant is also close to road, rail and air transportation routes.

Roquette isn’t the only pea processor to open up shop in Manitoba. The province is also home to Merit Functional Foods, which just completed construction of its facility in Winnipeg.

But it is among the latest international companies to look at Manitoba — and specifically Portage la Prairie.

Several food and industrial processors have either opened or expanded in the southern Manitoba city in recent years.

Simplot, which produces potato products, is in the midst of finishing an expansion of its plant just outside the city as well.

Portage la Prairie Mayor Irvine Ferris believes companies are looking to the region because of its central location in Manitoba and proximity to different modes of transportation.

He said Roquette’s construction alone has helped boost the economy in the city of roughly 13,000, and believes there is even more potential to bring people in.

“It certainly raised our profile, and of course after that we saw the expansion of Simplot and we’ve had lots of interest … in Portage and in the region,” he said.

But as everywhere, the COVID-19 pandemic has had an impact on the plant’s construction. Roquette Canada spokesperson Michelle Finley says there have been 11 cases among people working on the site since the pandemic began.

Four of those were connected to a group of construction workers who all carpooled to work at the site together.

The company also wasn’t immune to supply chain disruptions or travel restrictions — like mandatory quarantines for staff travelling to Manitoba from overseas.

Roquette took its first shipments of Manitoba yellow peas at the Portage facility in November 2020 from a grower near Carberry, Man. To date, Roquette has received more than 200 truckloads of peas to site.

Those peas are being used to test machines and calibrate some of the plant’s sensitive equipment, as well as train operators.

The facility is expected to process 125,000 metric tons of peas per year once it reaches full operation next year and will also have both Kosher and Halal certifications, according to the company.

“The next stage is the pre-commissioning and commissioning [of equipment] and it’s very important to be on the ground with our subcontractor,” said Deneuville. “It is not possible to start everything up at the same time.”

Deneuville also said it’s important for Roquette to be “very integrated in the community,” and she’s looking forward to seeing how the plant and its employees become part of the community in the Portage la Prairie area.

“We are here for the peas, for the farmers and transportation … and the community as well.”